The Aussie/CoreLogic 25 years of Housing Trends report reveals the highs and lows of the Australian residential property market from 1993 to 2018. From property prices to interest rates, home loan sizes, mortgage serviceability, investment, housing affordability, density and the top suburbs for growth, this free report covers the hot topics in property.

Housing price growth in Australia over the past 25 years

Strong housing market conditions over the last 25 years have boosted median house values by 412 per cent or $460,000.

The housing market has shown some extraordinary changes over the past twenty five years, with conditions moving through five distinct growth cycles which have pushed national median house values 412% higher. Over the same period, the ASX All Ordinaries index has risen by a substantially lower 261%.

Twenty five years ago, the median house value across Australia was just $111,524 and units showed a slightly higher median value, at $123,840. Since 1993, median house and unit values have increased by 412% and 316% respectively, providing homeowners with a significant wealth boost. The capital gain over the past 25 years equates to an annual growth rate of 6.8% for houses and 5.9% for units, in dollar value terms, the median value of the typical Australian house has risen by $459,900 since 1993 and unit values are $392,000 higher. 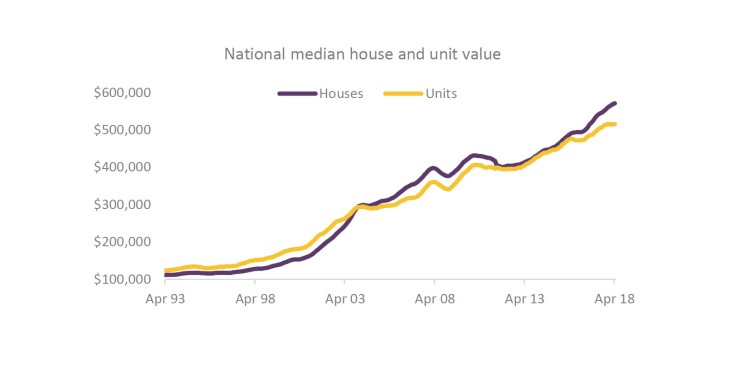 
Chat with an Aussie Broker about your property plans

I want to buy a home
I want to refinance

At the same rate of growth over the next 25 years, Australia’s national property values could rise to $2.9 million for houses and $2.1 million for units by 2043

If the historic averages play out over the next twenty five years, Sydney values would be breaking the $6.3 million mark and Melbourne would be over $5.8 million

One thing that is certain is that housing markets will continue to move through their cycles, with periods of growth, decline and steady values conditions. History has shown that over time these cycles tend to smooth out the year to year volatility in growth rates.

A good example of this is the Melbourne housing market, which has shown the highest long term rate of capital gain, however house values in this city have been through five separate periods where values were declining on an annual basis over the past twenty five years.

Source: CoreLogic Median values have been extrapolated based on applying the annual compounding growth in median values over the past twenty five years to current median house and unit values.

Mortgage sizes have increased roughly in line with property values, up 376 per cent or 6.4 per cent per annum

The average owner occupier loan size has broadly increased in line with dwelling values across Australia, with the typical loan size reaching $388,100 in 2018.

The average size of a mortgage across Australia has increased roughly in line with dwelling values over the past quarter of a century, with the annual rate of increase tracking at 6.4% per annum compared with national house values rising at 6.8% per annum and national unit values rising at 5.9%. The average loan size for owner occupiers across Australia, based on data to March 2018, was $388,100, having increased from just $81,500 twenty five years ago.Twenty five years ago, borrowers in the ACT were holding the largest loans, averaging almost $97,000, however in today’s market the largest average loan sizes can be found in New South Wales ($445,500) and Victoria ($400,200).

Housing affordability is a major issue for many Australians, with borrowers needing to dedicate 135 per cent of their annual gross income to raise just 20 per cent deposit nationally

Housing affordability pressures are most felt in the markets where home values have risen dramatically: Sydney and Melbourne.

The dwelling price to income ratio rose to new record highs in 2017 due to housing prices rising at a faster pace than household incomes. This worsening trend in affordability was largely driven by the largest capital cities, Sydney and Melbourne, where housing values have shown the most significant increase. Sydney’s dwelling price to income ratio is now tracking at 9.3, which means the typical Sydney dwelling now costs 9.3 times more than the median annual household income.

Source: CoreLogic, ANU Based on median dwelling prices with an allowance for 20% deposit. Interest rates are based on average standard variable mortgage rates overtime as reported by RBA.

Higher density living is increasing, with the average vacant block of land shrinking from 820 square metres nationally to 610 square metres

Over the past 25 years, more buyers are choosing to purchase a unit over a detached house because of the cheaper price points and often more strategic location.

The growth in property values over the past twenty five years has happened against a backdrop of ongoing densification across the capital cities, with higher density housing stock rising in prominence due to changes in town planning policies, changing consumer preferences and affordability factors. Twenty five years ago, only 22.7% of all dwelling sales nationally were for units. In today’s market, units comprise 29.6% of all sales and in some cities where the densification trend has been more pronounced, higher density dwellings account for more than 40% of all sales.

Source: CoreLogic The percentage of unit sales is based on dwelling sales over the 12 months ending April 1993 and April 2018, except for Darwin where data commences from 1999.

Melbourne had the largest increase in property values within a capital city over the past 25 years, followed by Sydney and Perth

Across the Top 100 suburbs for price growth over the past twenty five years, 81 were located in a capital city.

The vast majority (41) were actually located in Melbourne with the second highest proportion based in Sydney (25), followed by Perth (12). The pattern follows the broad capital city trend, where metro Melbourne has led the long term growth rate with overall median house prices rising by 8.1% over the past twenty five years, while Sydney prices were 7.6% higher per annum and Perth prices were up 6.7% per annum. 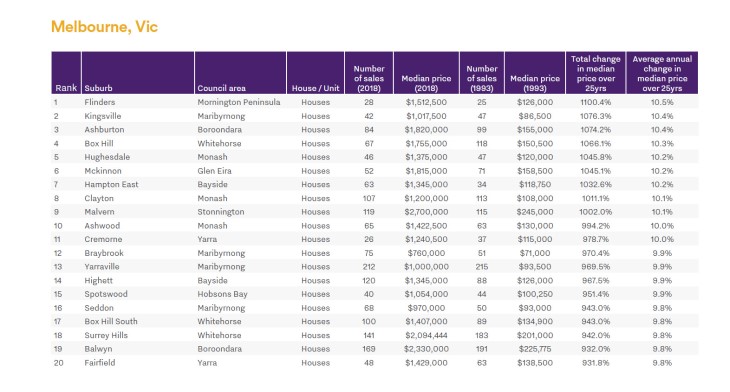 Nine of the top 10 suburbs for value growth in the country are located in regional coastal or lifestyle locations, with many performing well above their capital city counterparts

CoreLogic has identified the best performing suburbs for price growth over the past twenty five years, based on change in median prices between 1993 and 2018.

Despite the two largest capital cities comprising the large majority of suburbs within the Top 100, nine of the top ten suburbs were actually located within regional markets. Byron’s Suffolk Park topped the list, with the median house price moving from just $74,250 twenty five years ago to $1,185,000 in 2018; an increase of 11.7% per annum. Coastal and lifestyle markets around the South West of Western Australia and the Hunter region of New South Wales were amongst the strongest performers across the regional markets, comprising 6 suburbs and 4 suburbs respectively across the Top 100 list of highest growth in median prices.

Use our suburb spotter map to see where you could buy.

Get the 25 years of Housing Trends Report

We’re interested in getting to know you. Your local Aussie Mortgage Broker can help you compare home loan options.
Book an appointment

Give us a call

We can help answer your interest rate questions — or help you find the right questions to ask.
Talk to an expert